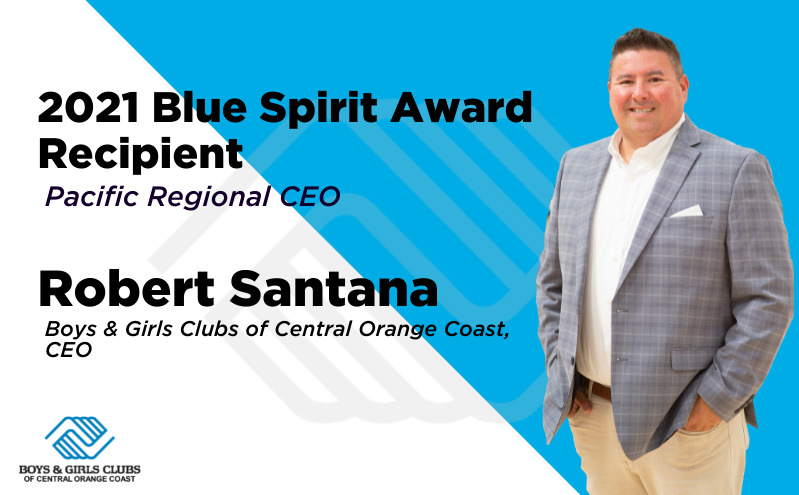 This award is the highest honor presented by Jim Clark, President of Boys & Girls Clubs of America, to a local club leader in their region. The Blue Spirit Award recognizes leaders who have demonstrated what it truly means to be a Club and community leader and have gone above and beyond to drive impact and make a difference.

The announcement was made during this year’s BGCA Pacific Regional Celebration Virtual Celebration. “Robert,” said Jim Clark “you are a clear example of how our movement has risen to a set of challenges unlike any of us have faced before.”

During the spring of 2020, as we all struggled with how to move forward with the COVID-19 pandemic, our Club realized our community needed us now more than ever. Through Robert’s leadership, a strategic reopening plan was created to keep the kids we serve and our staff safe for when our Clubs reopened for in person programming in April 2020. As a result of this new operating policy and procedure, our Club was able to share this best practice throughout the Boys & Girls Clubs of America movement, offering guidance learnings that allowed multiple Boy & Girls Clubs across the nation to safely reopen their doors.

His passion to impact the lives of youth led him to the Boys & Girls Club of Santa Ana. He started as a volunteer and mentor with the Club, and his relationship with the Club continued to grow. Within three years of his first visit as a volunteer, he became the Chief Executive Officer in 2008 where he now oversees the operation of 66 sites; including 4 Club sites and 62 partner school sites.

As the leader of the Boys & Girls Clubs of Central Orange Coast, Robert has brought innovation, vision, and leadership to an organization with 80 years of impact.

Robert is active throughout the movement and has become a resource to other non-profit groups. In addition to being a member of several community task forces and philanthropic communities, he currently serves as a member of the

He has also served as the

His background in law enforcement, business management, and child development creates a unique blend of experience, which leads to his effectiveness as a community leader. Under his leadership, the Boys & Girls Clubs of Central Orange Coast has become one of the premier Boys & Girls Clubs in the Pacific Region and holds a strong tradition and progressive approach to improving and expanding programs.

Upon receiving the award, Robert had this to say, “We don’t do the work we do for recognition, we do it because we are very lucky to have influence on other people…most importantly the kids we get to impact.”